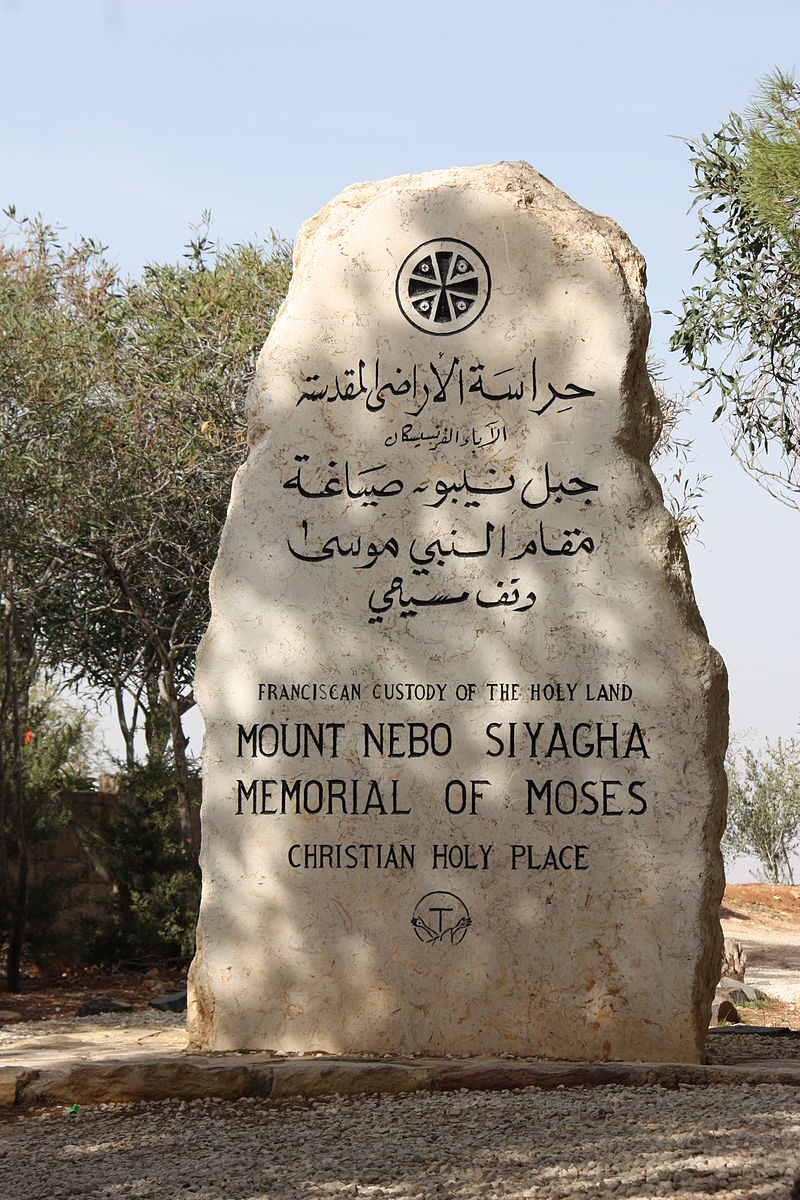 Mount Nebo – From Mount Nebo’s windswept promontory, overlooking the Dead Sea, the Jordan River Valley, Jericho and the distant hills of Jerusalem, Moses, ‘the servant of the Lord’ and ‘the friend of God’ (Deuteronomy 32:49 and 34:5) viewed the Holy Land of Canaan that he would never enter.

He died and was buried in Moab, “in the valley opposite Beth-peor”. His tomb remains unknown. After consulting the Oracle, Jeremiah reportedly hid the Ark of the Covenant, the Tent and the Altar of Incense at Mount Nebo.

Mount Nebo became a place of pilgrimage for early Christians from Jerusalem and a small church was built there in the 4th century to commemorate the end of Moses’ life. Some of the stones from that

church remain in their original place in the wall around the apse area. The walls and floors are decorated with beautiful mosaics.  The church was subsequently expanded in the 5th and 6th centuries into the present-day large basilica with its stunning collection of Byzantine mosaics.

The serpentine Cross, which stands just outside the sanctuary, is symbolic of the bronze (or brazen) serpent taken by Moses into the desert and the cross upon which Jesus was crucified.

The ancient church, a pilgrimage destination since the 4th century, was excavated between 1933 and 1938 by Sylvester Saller, bringing to light the basilica with its chapels and the annexes of the monastery.The exquisite mosaics were then covered back with soil for protection. In 1963, the Custody of the Holy Land decided to restore the mosaic floors and Virgilio Corbo was put in charge of the project  A metal shelter designed in Oxford was erected over the ruins, but work was interrupted by the 1967 Arab-Israeli war.

Renewed work ensued between 1976-1984, when a new mosaic was discovered in the diaconicon-baptistery. By 1984 the consolidation work was completed, and as a result the basilica could be used both for liturgical purposes, as well as for displaying the restored mosaics, either in situ or mounted on the walls. After renewed plans drawn in 1989 and geological surveys and assessments of the ancient and modern structures made a decade later, a new shelter, basically a complete basilica was built over the ancient church between December 2007 and the reopening day on 15 October 2016. Not even the sudden death of Michelle Piccirillo, a key figure in the project, in October 2008, did lead to a break in the work.